What were nine San Francisco bands doing playing an all-day festival in San Diego County in September of 1968? How did this come about? Well it all started in the spring of 1968 in La Jolla California with a bunch of guys Ron “Anchovy” Barca, Kip Winsett, Don Collins, George Driver and a few others were sitting around in their pad on Playa Del Sur talking when they had the idea of doing a rock concert in San Diego.

he more they talked the more they got excited. If you La Jollans’ remember they had already put on a couple of “loveins” at the recently opened UCSD campus and the Cove Park in La Jolla. The next thing they knew, Trans-Love Airways Productions was born.

But it did not come easy, some sleazy “establishment” guy had all of the concert venues in San Diego sewn up for over a year and they just about  abandoned the idea. But that did not stop these La Jollans. It first started when one found this huge roller skating rink downtown San Diego at Front and G and somehow they were able to get it. It had oak floors, sprayed acoustical ceilings and half walls which meant the sound from the stage just blasted straight out with no echo or bounce muddying things up. There was even a genuine ticket  booth at the entrance. How bitch’en was  that? Then the name, Hippodrome Ballroom and Trans-Love Airways Productions was in business!

So many people volunteered so much of their time cleaning the place up, and setting up a stage at one end. They rented a huge sound system, with a pro mixing board, 5 ft tall speakers, stage monitors for the bands and hired a professional sound guy to run the whole system for every performance.

They had an incredible gifted graphics artist, Becky Galdeano, who created super psychedelic posters and handbills that her sister Super Viv and others distributed all over the city of San Diego and some areas of the county. They had, by far, the best light show in the country from Mirkwood Lights, put together and run by Reggie Hager.

Steve Miller Band, Alexanders Rag Time Band and Baptized by Fire opened the Hippodrome Ballroom June 7 and 8, 1968. Now check this out, tickets to all the concerts were $2.50. However, you could probably get in for free if you couldn’t afford to buy one.

The Hippodrome Ballroom had an all-star line up just about every week. June 14 and 15, they featured the Velvet Underground, one of the premier bands in New York City at the time. Clover and Maya (local bands) opened for them.

At a party in Rancho Santa Fe after the the Saturday night gig Buddy played 2 electric egg beaters – it was an amazing display of rhythm virtuosity!

June 28 and 29 the headliner was an LA band called Kaleidoscope while 2 San Diego bands, Baptized by Fire and Maya opened the show.

July 5 and 6  they brought in the Quicksilver Messenger Service — one of the bands they had initially sought to book simply as a single gig. That same night they had The Velvet Underground. Now how cool was that — West Coast and East coast bands on the same night!

July 12 and 13 were supposed to be Dr. John the Night Tripper and his Louisiana Voodoo Show but he had to cancel at the last minute  so The Sons of Champlin from Mill Valley in the Bay area played.  They brought to the late ‘60s music scene a soulful sound built around a horn section, and sophisticated arrangements.

July 19 and 20, the rock and roll legend Bo Diddley was one of Kip Winsett’s favorites. The house band, Maya, and The Frumious Bandersnatch also played.

August 2 and 3,week 8 – the final performance of the summer featured San Francisco’s Grateful Dead. We all know what an incredible band they were as it has gone on and on and on. Their performance at the Hippodrome highlighted some of their of long musical improvisations – a hallmark of the band.

But they saved the best for last.

On September 22 1968 TransLove Airways produced it’s final music event with an incredible all day, into the night event at the Del Mar Fairgrounds racetrack with an incredible lineup that included The Grateful Dead, Buddy Miles, Taj Majal, Sons of Champlin, Pacific Gas and Electric several bands sponsored by Ken Kesey, (including the Merry Pranksters, The Youngbloods, Phoenix, Ace of Cups) and a host of others that rocked the stand for hour after hour.

And guess what, all the bands played for FREE!!!

This was one of San Diego’s most awesome venues – so enjoy the video of this “Blast From The Past” performance of these little-known bands at the time that became legend. 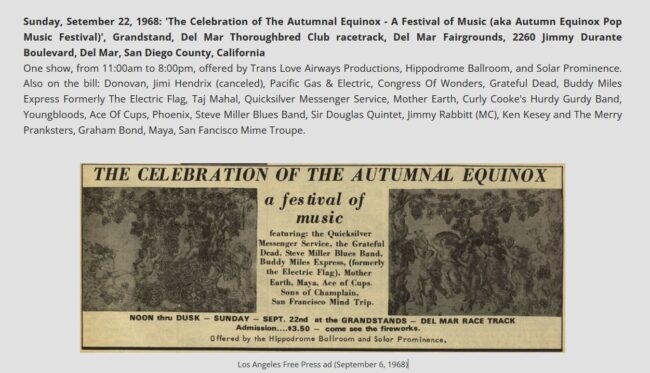 Albert wishes to thank, Eric Masterman for the film/video and Kip Winsett for the content.