Back in 1960 Bob Moore wanted to be a filmmaker, so he bought himself a Bolex 16 mm movie camera. At the same time Eric Masterman and John Pirie were roommates, so Bob called them up to see if they wanted to make a film and star in it. “Cool … sound like fun,” they both said. 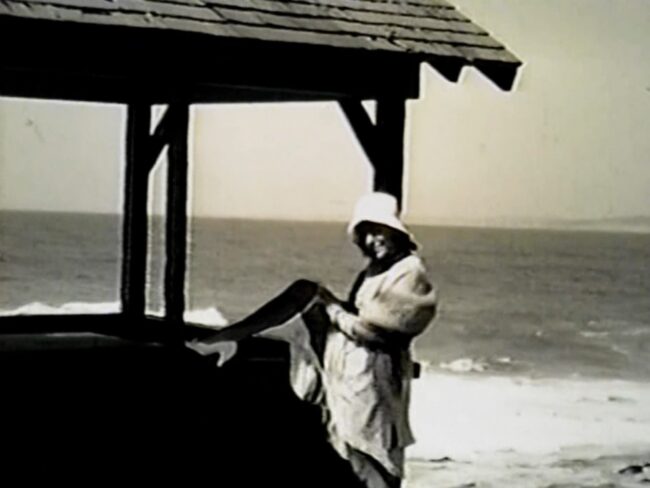 Bob then called Robert Rakestraw  and Jenine ‘Flea” Curren (a girl he probably meant at WindanSea) and asked them the same thing. He told all what he wanted to do.

It was pretty spontaneous, like the day before, they were told to go meet at the Cove to film this Charlie Chaplin-like flick.

Bob was serious. He went to some Thrift Store or Flea Market and bought all these Roaring 20s fashions, bags, and other props, like the stethoscope and bag.

There was no written script, Bob handed all these costumes and props to the gang.

Then Bob sorta put a verbal script together and said, “Lets try and make this look like something Chaplin would do.” So they started acting out the roles as Bob shot film.

Once this film (dubbed, La Jolla Belvedere Harlot by Albert) was shown in a few living rooms, suddenly everyone in La Jolla wanted to be in the movies. So Bob got into the amateur film-making business where he filmed a few more of the Chaplin-like films.

Also, Eric was thinking about the same with Bob, so in around mid-60s Eric bought Bob’s movie camera.

Bob did some more filming but his passion did not last long. However, Eric went on and filmed one event that has become historical. That film is currently being viewed 55 years later by those involved. Albert hopes to release a teaser of it shortly.

What makes ‘La Jolla’s Belvedere Harlot’ so unusual and rare, there is little known photos of Rakestraw, let alone any videos of him. Now add a video of him acting, and you have, wow, what a great find in Eric Masterman’s archives that he passed to Albert about 17 fricking years ago and it was only the other day, Albert found it.