You are here: Home / About Mac

John Duncan “Jack” Macpherson IIII (October 20, 1937 – November 16, 2006) was a former mailman and bartender in La Jolla, California. According to his Los Angeles Times obituary, he was a local legend who acquired “a permanent niche in the history of Southern California beach culture”.

Macpherson was born in La Jolla, the oldest of two children of an orthopedic surgeon who was also serving in the United States Navy; the family moved to Hawaii, where Dr. Macpherson was stationed and where as a four year old, Jack witnessed the Japanese attack on Pearl Harbor. The family returned to the States on a Dutch freighter, and Jack and his sister Jill grew up in La Jolla, and later the nearby community of WindanSea.

One of his sister’s boyfriends taught Jack to surf at the age of eleven, and after graduating from La Jolla High (where he also ran track), to his parents’ dismay, he started hanging out at the beach, with a number of surfers, including Robert Norris Rakestraw (December 8, 1940 – September 21, 1996), commonly known as Bob, and to his friends as “Meda”, after a word he used as a swear word. Soon Jack (or “Jack Mac”, as his fellow surfers called him) and Bob became fast friends to the extent that they were almost always seen together and would enter the scene to the cries of “Here comes Mac and Meda; they’re a walking destruction company.” 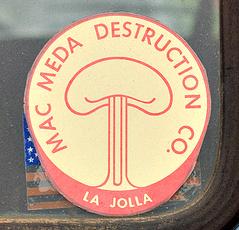 Around 1960 Macpherson and Bob Rakestraw meant in a bar (Maynards?). Mac was impressed with Bob’s drinking ability when Bob powered down a pitcher of beer in a few seconds. Like it was destined to happen, they became friends – both were seen hanging out together.  Shorty later they brought together their friends, acquaintances, and hangers-oners into a loose organization they called the Mac Meda Destruction Company, described as “a beer for demolition crew”. The group was featured in Tom Wolfe’s 1968 book The Pump House Gang. Wolfe described them as going “Ooooo-eeee-Mee-dah! They chant this chant, Mee-dah, in a real fakey deep voice, and it really bugs people. They don’t know what the hell it is. It is the cry of the Mac Meda Destruction Company. The Mac Meda Destruction Company is … an underground society that started in La Jolla three years ago. Nobody can remember exactly how; they have arguments about it. Anyhow, it is mainly something to bug people with and organize huge beer orgies ,” which they called Conventions.

Soon the Mac Meda Destruction Company became known throughout southern California, primarily through the actions of Rakestraw, described as the wilder half of the pair—Meda was known for his propensity for destruction—he was known to break anything from windows to park benches—and his novel way of entering rooms—through the door and then out an available window. When they came up with the concept of Mac Meda Destruction, Macpherson stenciled the words “Mac Meda Destruction Company” on tee shirts with red paint and designed a logo depicting a mushroom cloud that appeared on bumper stickers. The fake company even had a fake president—Rakestraw was infatuated with Albert, a gorilla at the San Diego Zoo; Meda would just stare at the gorilla for hours on end. So “Albert Mac Meda” was listed as the president of the Destruction company, and his name appeared in the La Jolla telephone book. When the group’s depredations got out of hand and the local police were called, they would come looking for Albert Mac Meda rather than either Macpherson or Rakestraw.

Though the company was fake—described primarily as an attitude rather than as an organization—a group of Macpherson’s friends, including San Diego Chargers player Pat Shea, did do demolition of houses for free when Interstate 5 was being built through San Diego. However, the Mac Meda Destruction Company continued on, if only in spirit; at the time of Macpherson’s death, his longtime friend Doug Moranville continued producing t-shirts and bumper stickers with the Mac Meda logo at his t-shirt shop (“The Branding Iron“) in La Jolla. Stickers have adorned everything from walls to cars to the Galileo spacecraft that was launched in 1990, flew past Earth and the Moon and eventually (1995)went into orbit around the planet Jupiter.

Despite the flow of beer and other alcoholic beverages, Jack Macpherson was known as a natural athlete; he was a champion cyclist who participated in long distance races; he was also adept in volleyball, diving, surfing and skiing. Macpherson was employed by the United States Postal Service as a letter carrier, primarily working in the Bird Rock area of La Jolla; he worked until his retirement in 1991, when he became a full-time bartender at the London’s West End bar at 5157 La Jolla Boulevard in the Pacific Beach section of La Jolla, working Wednesday through Sunday 6 am to 10 am.

He died of liver and kidney failure at the age of 69. Both his marriages ended in divorce; he was survived by a son, John Duncan Macpherson IV, two grandsons, and his sister, Mrs. Jill Higgins.